I loved the board game of Lasca a lot when I was a child. I used to play Lasca with various family members in my grandfathers house when we visited my grandparents during holidays.

Decades later, I occasionally I tried to find this game in shops but it was not available anywhere. Some day I inherited the very game set that I had used in my childhood. Even the printed instructions had been preserved in their original form. Not only the printed instructions had suffered – probably it was myself who had used the paper to exercise hand writing on them during my first year at school – but also the „soldiers“ had lost much of their varnish over time.

I thought about ways to complete or replace my old set of Lasca pieces. Empty Nespresso capsules came into mind. They come in different colors and they are easy to stack. Hower, there is a shortcoming: The color of captured pieces inside the stack of Nespresso capsules would be almost impossible to see; only the color of the top piece in a stack would be clearly visible.

The classic replacement for the original Lasca-pieces are standard pieces as used for checkers/draughts (German: Dame) and mill (German: Mühle). With these, the same piece can be used as „soldier“ or as „officer“ just by turning the piece upside down. That is, a mark is placed on one face which qualifies the piece in this orientation as an officer. However, this approach has a shortcoming too: „Soldiers“ and „officers“ in a stack can not be distinguished.

Other options might be Poker chips or certain stackable plastic pieces for smaller children. However, these seemed either too big or too small and none of the inspected alternatives did feel quite right.

This led me to design 3D-printable game pieces along the lines of my inherited old pieces. These pieces have the same size as the original ones and they are compatible with those.  They can be used either on the original board shown above, on the board of Lasca.org which you can print on paper yourself, or on the fields of a game board with standard size as used for chess, draughts or checkers. 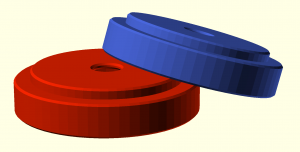 If you are interested in a set of such Lasca pieces, then just drop me an email.